Zweihander has managed to do what so many OSR retro-inspired RPGs currently fail at – it both intimately captures the spirit of a certain type of fantasy (in Zweihander’s case, the blood-soaked and mud-drenched “dark fantasy” genre) and escapes from its mechanical and social shortcomings. Too often, games inspired by what came before forget that this hobby has grown and changed, and hew too close to outmoded tropes and bad design. Zweihander manages by the grim machinations of its creator, Daniel D. Fox, to forge itself into something both eerily familiar and utterly belonging to the current moment in games. The diverse and beautiful art, the modern and purposeful writing and the powerful sense that this game is a game made not only to pay homage to what came before but to make something new of it all elevates Zweihander above every other retro-clone and nostalgia renaissance game out there. If I want a game about gritty losers trying to make it in a world out to get them, I’m going to reach for Zweihander every time.

Zweihander RPG won the golden ENnie for the best game in 2018, and to be honest, it deserves it. I’d heard a little about the game, but never had the chance to give it a go until recently. Zweihander considers itself a retroclone of Warhammer Fantasy 1st Edition, is from the Old School Roleplaying game scene and if you were listening to me earlier, it’ll be clear to you why this is #1 for me.

First off, the book is huge. 692 pages of grim dark fantasy is an absolute delight to behold, let me tell you. Zweihander is without doubt a huge reading project to undertake, but the beauty of this game is it’s deceptive simplicity. While traditional D&D players may feel overwhelmed upon initial glance, the core mechanics of Zweihander are quickly and efficiently explained. For WFRP fans it’s like meeting an old friend.

Similarly to WFRP, Zweihander combat is intense and pulls no punches. Each round you begin with 3 Action Points, or AP, with which you can move, attack and pull stunts. The huge range of moves you can make within combat allows for parries, ripostes, doges and feints without the clunky advantage mechanics of the aforementioned Warhammer 4th Edition.

Zweihander doesn’t have an official campaign setting that comes in the book. The Grim & Perilous system is designed to inhabit any world to your liking – Game of Thrones, the Witcher, or even a historical medieval world. This means that it’s modular, and adaptable to a variety of situations, though it still includes rules and monsters for almost any given world you could imagine.

What’s more, the book is damnably cheap and affordable. Right now, you can get a 692 page PDF of Zweihander for just $10 on DriveThruRPG. Think about that! That my friends, is bang for your buck.

Winner of the ENnie gold Best Game and Product of the Year at Gen Con 2018, featured on Forbes.com, ranked one of the best-selling fantasy tabletop role-playing games at DriveThruRPG and having moved over 90,000 copies worldwide, ZWEIHÄNDER Grim & Perilous RPG is a bloodier, grimmer and grittier version of classical tabletop role-playing games. This revised edition is published in celebration with Andrews McMeel Publishing, and features a refreshed layout, new artwork, rules clarifications, color plates by Dejan Mandic and errata.

ZWEIHÄNDER Grim & Perilous RPG is a game where your characters will:

Using the Powered By ZWEIHÄNDER d100 game engine, you will create grim characters, write perilous adventures and build your own low fantasy & dark fantasy campaigns. These rules are a perfect fit for Renaissance and medieval-styled adventures, too. You can also use this book to create your own homebrewed worlds, whether inspired by the works of Andrzej Sapkowski’s The Witcher, George R.R. Martin’s Game of Thrones, Glen Cook’s Black Company, Myke Cole’s The Armored Saint, Robert E. Howard’s Solomon Kane, Scott Lynch’s Gentlemen Bastard series or other ‘grimdark’-inspired media.

This all-in-one game includes most of what you need to play: a character creation guide, game mastery rules and a bestiary brimming with creatures both fair & foul. All that’s left are a few friends, pencils and a handful of dice.

ZWEIHÄNDER Grim & Perilous RPG awaits, and the fate of your grim & perilous tale hangs in the balance! 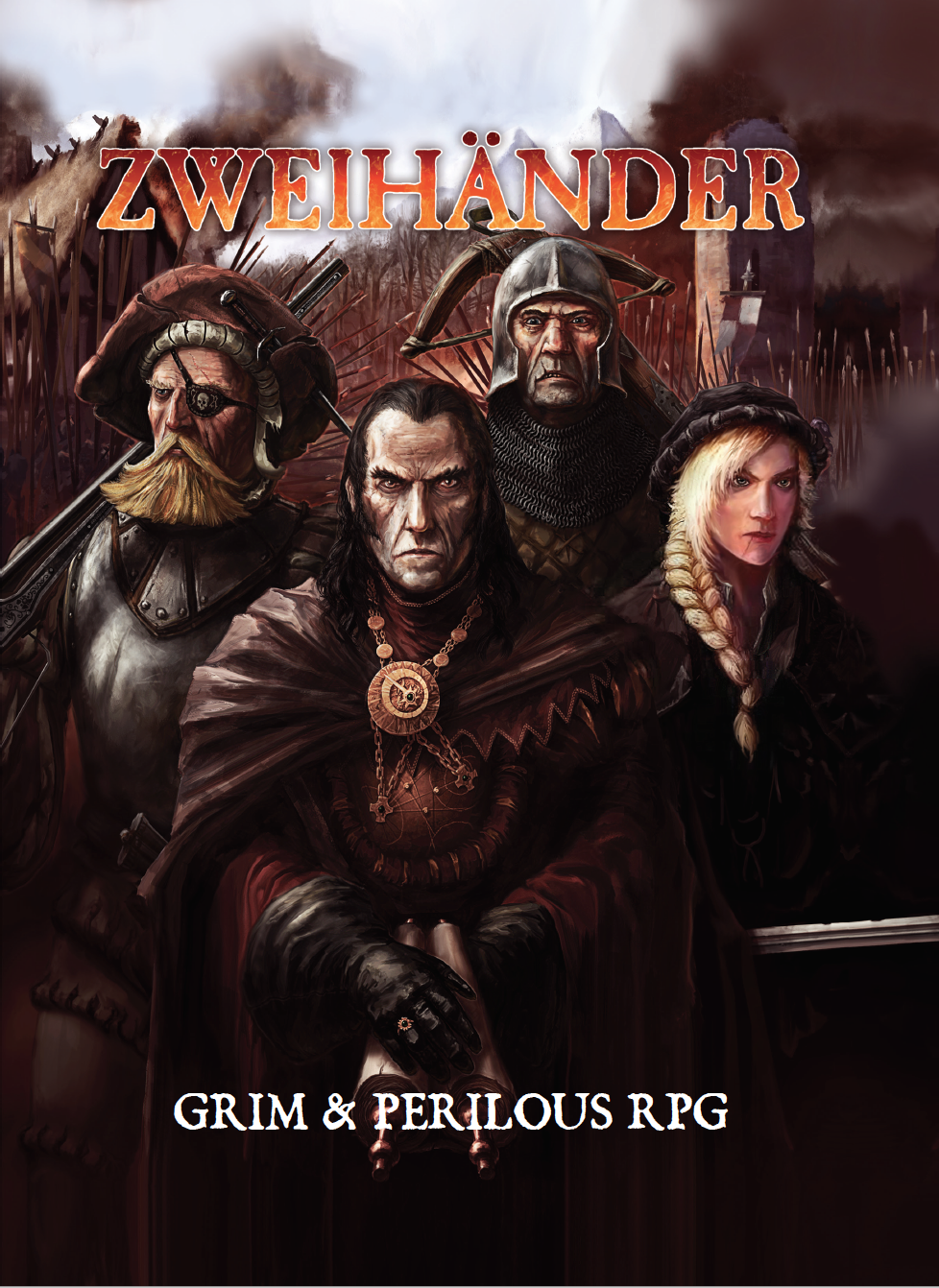