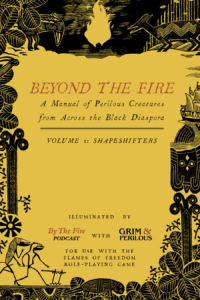 So much is happening in the ZWEIHÄNDER community this Halloween season. FLAMES OF FREEDOM is released. The horrific, dark Blackbirds RPG from Ryan Verniere nears its last few hours on Kickstarter (don’t miss out!). And … a surprise treat from the crew at Grim & Perilous.

G&P has joined forces with the fantastic Kene’h Oweh of the By the Fire Podcast to bring you Beyond the Fire: A Manual of Perilous Creatures from Across the Black Diaspora.

Beyond the Fire is your collection of pocket guides for including mythical creatures from the Black diaspora in your Flames of Freedom role-playing game. Each volume will contain four supernatural threats; described to you by Kene’h Oweh, illustrated by Ken Duquet, and developed by Grim & Perilous Studios.

The first volume, Shapeshifters, will release on DriveThruRPG the first week of November 2021.