Good evening, Grim & Perilous fans! Make yourself comfortable, and pour yourself a drink of your choice while I introduce myself. My name is Nick O’Hare. I’ve found myself around the gaming table of Daniel Fox, Adam Rose, Mike Bossaller, and other G&P members, for the better part of two decades. During Zweihander’s development, I suffered through countless rules changes, character sheet redesigns, and game sessions. From Corehammer to the Grimdark edition, to publication, Main Gauche, and beyond, I aided in rules development. You can currently hear me on the Grim & Perilous Podcast playing in Daniel Fox’s Desperation point campaign. The major NPC Garth in Adam Rose’s Radiator podcast was my former character. Through all this, I never really thought of myself as a game designer, despite my obvious impact on the development of these games. Recently, I’ve found myself in a more active game development role, in a couple of as of yet unannounced G&P products.

Two of my hobbies, amateur home bartending, and board games are, by nature, social, so I’ve had to adapt. It’s been a fairly dry 2020 for me (but feel free to @ me on the Zweihander Discord about my aged eggnog batch I threw together for the holidays). As for board gaming, it hasn’t been much better. When I first heard about solo board gaming (pre-pandemic), I thought it sounded a bit pointless. Why wouldn’t I just play a video game or watch TV? But after months of no gatherings with friends or meetups, I decided to attempt solo board gaming and see how I enjoy it.

Join me in this series of reviews of solo board games, where I provide my thoughts on game design from the perspective of someone with experience in it. I believe there is something to the trend that I’m missing. I hope that what I learn in this and future articles increases my enjoyment of solo gaming, and provides insight on my own future game designs. I know that Tabletop Simulator and other virtual board game platforms exist, but quarantine is my best excuse to jump wholeheartedly into solo board gaming.

As a final disclaimer before I begin, the opinions expressed in my reviews are mine alone and do not necessarily reflect the views and opinions of other G&P members. I value their opinions greatly, and I love discussing games with them. I also hope to discuss our feature game with anyone in the comments section below. 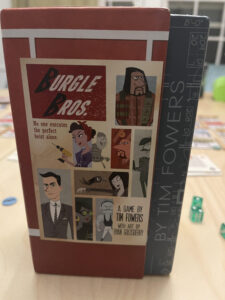 Tonight’s game is Burgle Bros., by Tim Fowers. The game is listed at 1-4 players. I’ve played this game countless times with friends, and loved it, but never alone. The theme of Burgle Bros. is a 1960s mid-century modern style heist game that pulls references from heist movies such as Ocean’s eleven. The game takes place in a three-story building with patrolling guards on each floor. The object of the game is to find the safe on each floor and crack it, then escape to the roof. 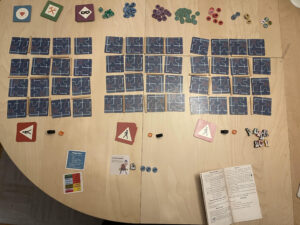 The game board is composed of three sets of sixteen tiles, turned face down to create floors of the building. Each floor has a safe and a staircase. On each player’s turn, they may take up to 4 actions, including:

If a player takes 2 or less actions on their turn, they must draw an event card, which is often bad, but sometimes good. 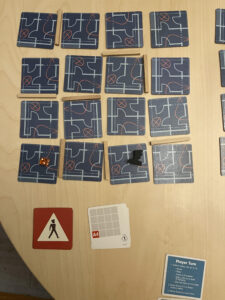 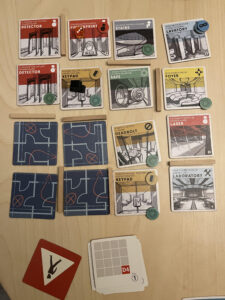 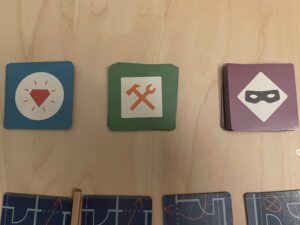 The interesting thing about loot in this game is that it always gives negative effects to the player, making gameplay more difficult and interesting as the game progresses. Whether you’re stealing a radioactive isotope, a bulky painting, or a yappy dog, the thematic details to the loot evokes silly scenes in my favorite heist movies where the characters run into a zany mishap during the heist.

Once all three safes have been cracked, the player escapes to the roof and flies away on the helicopter, ending the game. 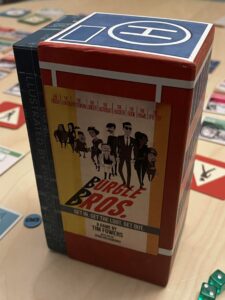 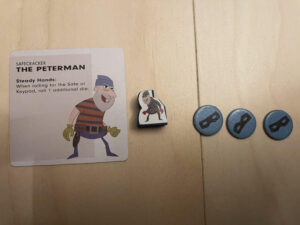 This game is absolutely dripping with thematic elements. The room tile backs look like blueprints of a large building as if the player is looking at the layout of the building from stolen blueprints. The floor tiles themselves have a clean, modern 1960s look, that evokes the heist films of that era. The characters have expressive faces, with alternate art, and abilities for each character. The events, loot, and tools all naturally fit in any classic heist movie. Even the box looks like a large office building with a helipad on top. 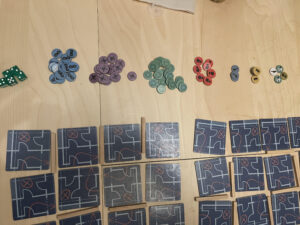 The components are excellent. The tiles are chunky and substantial, the little wooden room dividers are sturdy. The tokens and meeples are standard affairs, but the loot, tool, event, player, and reminder cards are all high-quality stock. The dice are small, but they fit on the tiles nicely. If they were any larger, they’d cover up too much of the tiles. My only gripe with the components is that it takes a bit of practice to cram them all into the tiny box and get it to close properly. 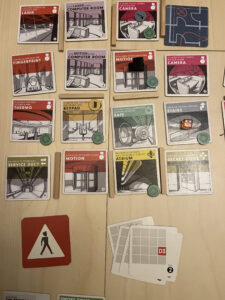 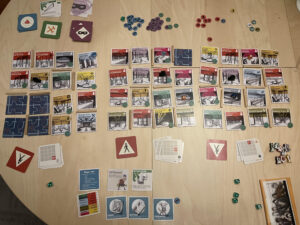 In terms of solo gameplay, I rate this game quite highly. I really love playing this game with friends, and I wasn’t sure how things would go in a solo setting. I’m pleased to say the game ran pretty much identical to multiplayer gameplay. I found myself playing the game quicker than with friends since I wasn’t worried about quarterbacking other players’ turns while playing alone (which is one of my only critiques with this game, since it is a co-op when played multiplayer). The act of moving the guard at the end of the turn is easy to grasp and can be nail-biting at times, particularly when they reach their patrol destination and you don’t know what their next stop on the floor will be. This game hits the sweet spot in lightness and strategy. If it were any heavier, it would be a slog to run. The theme, art, and gameplay blend together for a nostalgic take on your favorite heist movie tropes. 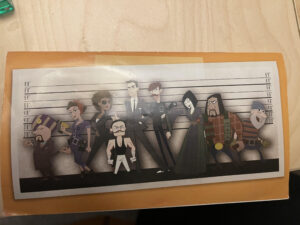 Overall, I highly recommend giving Burgle Bros. a chance. Everyone I’ve played it with has loved it, and even if you don’t have the opportunity to play with friends, it plays just as well solo.

If you’d like to try out Burgle Bros., you can find it on Amazon (and help our studio) by using this link: Amazon affiliate link

Thanks for reading! If you have any suggestions for solo games for me to review, please reply in the comments. Happy solo gaming!