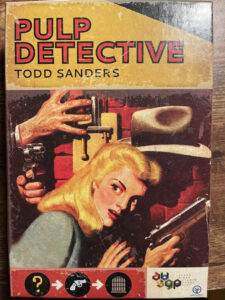 Tonight’s game is Pulp Detective, designed by Todd Sanders and published by Alban Viard Studio Games. Full disclosure, I Kickstarted this game primarily for the art, which consists of old noir detective comic book art from the 1930s that has fallen into the public domain (genius idea by Sanders, by the way–he managed to skip all the artist costs!). Pulp Detective is a dice rolling game that puts the player in the (gum)shoes of a detective or private investigator, in a film-noir type setting, complete with damsels in distress, Saturday night specials, trench coats, and the like. The game takes place over 18-24 turns, denoted as hours in the instructions. This gives a sort of “24” TV show, or Max Payne vibe–of a hard-boiled detective who burns the midnight oil to catch the criminal mastermind before they can strike again. 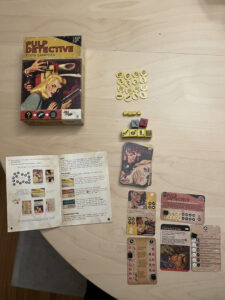 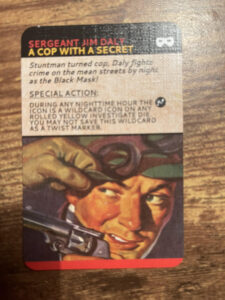 At the beginning of the game, the player chooses an investigator and a case. I chose Sergeant Jim Daly – A cop with a secret. His special ability allows him to use “make the rounds” rolls as wild during nighttime hours. I chose the Case of the Pilfered photo. 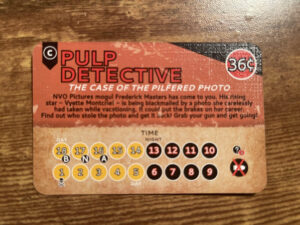 During each turn, the player looks at the backs of the top three cards in the deck, then chooses one to play, one to discard, and a final one to place back into the deck in a random location. Each card has a letter on its back, which indicates what the detective will encounter in the next hour. 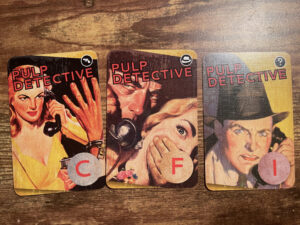 C’s indicate “cliffhangers”, which give you a better chance of gaining stamina.

F’s indicate “follow a lead”, which gives you a better chance of getting items.

I’s indicate “Informants”, which give you a better chance of finding clues. 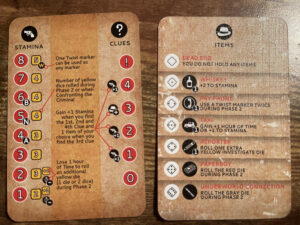 When choosing a card, the player has the opportunity to place it in one of several tableaus on the table, called “storylines”. Depending on how a player places a card, they may have the opportunity to reroll dice results. Each card has a set of required dice rolls, which increase in difficulty as the remaining number of hours in the case declines. Whenever the player fails a roll, they may save a “plot twist” token, which allows them to use it as a specific die face roll in a future test. 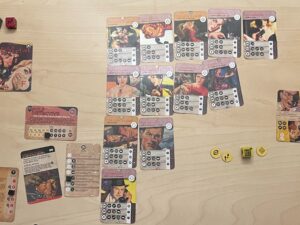 Once the requisite number of clues are uncovered, the player references all played cards. Whichever icon appears most frequently dictates who the criminal mastermind in the case is (The Spyder–Weapons Mastermind, in my case). The player must do one final roll to defeat the boss. 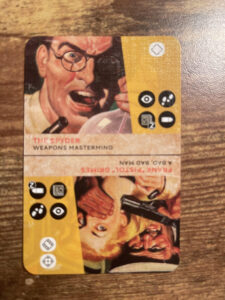 The gameplay itself is quick and straightforward, with turns lasting around 20-30 seconds each. The bulk of my time was spent looking at dice results and deciding where to place the cards in the tableaus. Side stories (tableaus below the main storyline) cannot be longer than the storyline above them.

I found myself frequently referring to the rules to reference the results of my successes or failures. The cards are information-dense, displaying a title, art, 3 difficulties with success/failure results, reroll markers, and a loot indicator. There is simply not enough room for reminder text. In my opinion, a game that calls for constant reference of the rulebook has a design problem. If I designed the game, I would have included a “cheater card” that showed all success/failure icons and what they referenced, to prevent players from needing to constantly reference the rulebook. What baffles me is that this game comes with cheater cards that show the items, clues, and stamina, but Todd Sanders failed to include one for the success/failure icons (noted in the white and brown columns in the photo below). 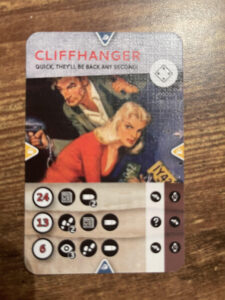 Component quality is mostly great. The dice are customized with indented icons matching the icons on the cards. The dice roll well, with no rounded edges, and easy to read faces. The cards themselves have a beautiful linen finish. My only two complaints are the wooden status cubes are referred to as red and blue in the book, but are actually red and yellow in the box. I’m not sure whether to consider this a rule book typo or a component error.  Also, the plot twist markers are cardboard chits, which I’m willing to forgive, based on the modest price of the game itself (€20).

The game includes rules for a 2 player variant, almost as an afterthought; the game itself admits that it is a solo experience by design. I have yet to attempt a 2 player playthrough of the game.

In conclusion, I don’t necessarily regret my purchase, as I appreciate the art, but the gameplay is mediocre, at best. The theme is excellent, but the act of dice rolling and conjugating rolls is not particularly exciting. The lack of options on your turn makes the game feel randomly won or lost, with little strategy or agency during gameplay. The option to place cards that allowed for rerolls during turns rarely arose. I played the game three or four times and succeeded about half the time. The game has three small expansions, (of which I own two) which makes me wonder if any of them address my criticisms. If I designed this game, I would have added a few more interesting features, such as the ability to consult other investigators, or the police chief, and add more mechanics that differentiate between night and day.

Thanks for reading! This would typically be the place where I’d provide a link to the product I just reviewed, but it is sadly out of print. If you have any suggestions for solo games for me to review, please reply in the comments.