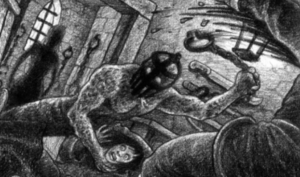 Patrons of the Grim & Perilous Patreon just received access to the Twelfth entry in our “Monster of the Month” series. In this one, we introduce the Feral Voorhemoth.

“It had been done. The vial had been emptied. It had tasted surprisingly saccharine and it went down easy, like communion wine. The shock on his wife’s face was bittersweet, as he knew he could spare the one thing he cared for most in this ever-changing world. That face, would forever be etched into his memory as the last clear image…”