Tonight’s board game is “Friday”, by Friedemann Friese. 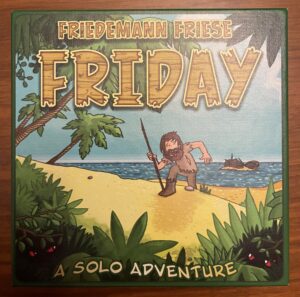 When I was a kid, I had a set of abridged classic books that had illustrations on every page. “The Adventures of Robinson Crusoe” was one of them. From what I recall of the story, Robinson had a pretty tough time surviving alone on the island, until he encountered a man he named “Friday”. He called him Friday because that was the day he encountered him. The book portrayed him as loyal, but not particularly bright. I appreciate how this game switches the narrative to the true hero of the story, and imparts some additional positive traits on Friday. Now that I think about it, I should probably read the unabridged book, but there’s no time for that at the moment, as I have some solo games to play! 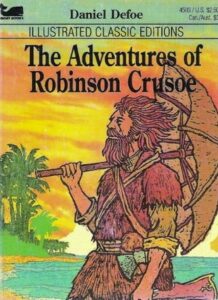 Friday is a solo deckbuilding game. You play Friday, from the Daniel Defoe novel “The Adventures of Robinson Crusoe”. Your task is to train Robinson to fight the pirates and escape the island, so you can continue your island life in peace. Your initial deck is a representation of Robinson’s starting skills when he crash lands on your island. The cards in the deck have a range of values from -1 to 2, including:

The turn order follows these steps: 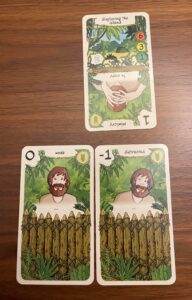 If the value of cards from your deck meets or exceeds the value on the hazard card, you flip the hazard card over, and add it to your deck. The newly added cards give either superior bonuses to the starting deck, or give minor bonuses, such as granting you additional life or draw free cards on your turn.

If the value on your cards is less than the value on the hazard card, you lose life equal to the difference in your value and the hazard value, and remove a number of cards from the game equal to the difference. In this way, you may remove unwanted cards from your deck. In the example above, I lost the fight, so I was able to remove both of the cards, but I lost 2 life.

Alternatively, you may lose one life to draw one additional card as many times as you want. When you run out of cards in your deck, you put one random aging card in your deck and shuffle it to form a new deck. The aging cards take 2 life to remove, and range in value from -5 to 0.

The pirate fight is similar to the hazard fights with one exception: you may draw additional cards at a rate of 2 life per one card. After defeating both pirate cards, you win the game!

I really enjoy the theme of this game. The way that the hazards you face become your strengths makes it feel like an extended training montage in some of my favorite ’80s movies. My favorite part of deckbuilding games is how removing cards is handled. I love how even losing in Friday is not always a bad thing. Deciding when to push your luck to win a fight, or cut your losses, and remove unwanted cards makes for interesting decisions on almost every turn.

Perhaps I’m just bad at deckbuilders, or this game in general, but I found Friday to be quite difficult. After playing about 10 times over a few weeks, I have yet to defeat both pirates. The game has a “hard mode”, which adds a -2 “very stupid” card to your deck at the beginning of the game, but I have yet to attempt hard mode, because even getting to the end of round 3 has been challenging enough for me. The rules were easy to understand, and were explained well in the rulebook.

Card quality is decent, and the little green wooden life tokens are nicer than cardboard chits, at least. The card art paints a picture of a dopey, yet endearing Robinson. He may be a dummy, but he’s *your* dummy! The game goes for around $17 on Amazon, so I feel like it’s a pretty good value for a solo game, particularly if you enjoy deckbuilders.

If you’re interested in trying out “Friday” for yourself, you may purchase it here: <insert Amazon affiliate link here>.

If you have it in your collection already, I’d love to hear your feedback on it, particularly if you have any tips for helping me defeat those pesky pirates! As always, let me know if there are any solo board games you’d like me to review. Happy solo gaming!