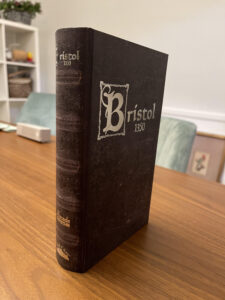 Good evening, Grim & Perilous ladies, gents, and anyone reading! Tonight’s game is Bristol 1350. Rules are by Travis Hancock, graphic design is by Holly Hancock, Illustrations are by Sarah Keele, and publishing by Façade Games. Bristol 1350 is a dice rolling game in which 1-9 players attempt to escape Bristol by way of horse cart during the second bubonic pandemic in 1350 CE. 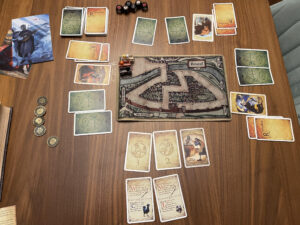 Player choose one of 18 classes and place themselves in one of 3 carts. Players are dealt symptom cards and remedies before the game begins. If symptom levels of any player are 6 or higher for any player at the beginning of the game, they are revealed, and 2 new symptom cards are dealt. If symptoms add up to 6 or more at any time after the initial turn, that player has the plague for the rest of the game, and their new objective is to make sure no healthy players win. Players win by crossing the finish line while all players within their cart are healthy. 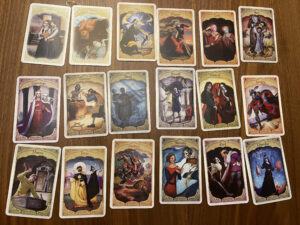 Each turn follows these steps:

The game ends when a cart crosses the finish line with all healthy players. 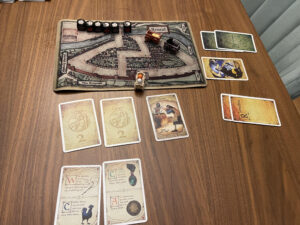 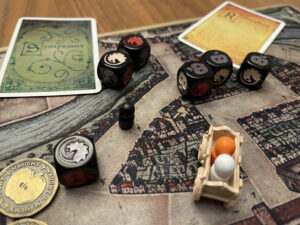 The game comes with a rubber game mat showing the city of Bristol. I appreciate the sturdiness of the map, and how all the pieces, including the mat fit into the box, which is shaped like a book. 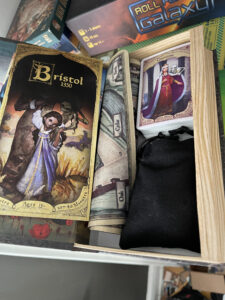 The instruction booklet is beautifully illustrated by Sarah Keele, and is competently written, explaining the rules well enough that I had no trouble trying the game (and solo!) for the first time. The pawns are small wooden pieces. The dice have inset faces, and are simple to read or feel, for playing in lower light conditions, or players with poor eyesight. The carts snugly fit the pawns and are beautifully crafted. I am not colorblind, and I am not sure if the colors of the components are colorblind friendly, but if they are not, that is my only critique of the components. Included were 6 “alms coins” which I did not use for my first playthrough, but are solid pieces. 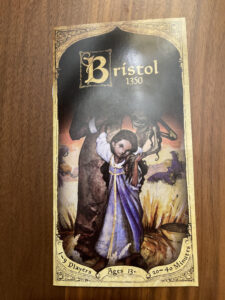 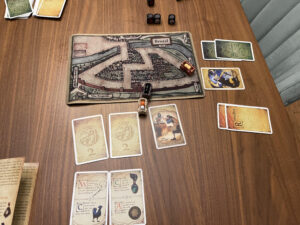 The Cooper (me) crosses the finish line healthy. Victory!

Despite the game’s grim (and perilous!) subject matter, it was simple enough to play solo, or in a larger group, I imagine. The solo rules add “ghost” players (1-3, depending on player counts). Ghost player rules are simple to understand, and involve rolling specific dice on their turns, and moving, if any apple is rolled. I appreciate the compact size of the game. It’s refreshing to see a great game that does not needlessly command a large shelf space. The table “real estate” of the game was also quite compact, allowing this game to (eventually) be played in public easily. I recommend this game to people who enjoy simple dice rolling games, particularly for people who enjoy solo and party games. 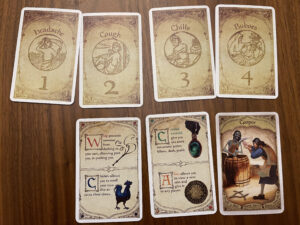 “Bristol 1350” can currently be purchased here