Good evening, solo gamers! I hope life is treating you well. Tonight’s game is a quick little dice rolling game for 1-8 players called Crypt. The story is the king willed his heirs an array of family heirlooms, but was laid to rest with them instead of passing them on to his kin. The servants of his heirs break into the crypt to claim the heirlooms they view as rightly theirs! As is tradition, I will review the solo version (known in Crypt as the “Only Child” variant) of the game in detail, but I’ll provide a few thoughts about the game with higher player counts. 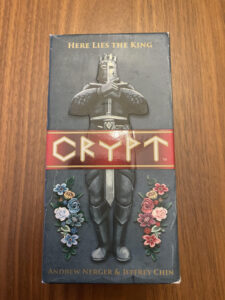 The player chooses a dice color and corresponding dice to represent the heir and their servants. An automated player stands in as the ghost of the king, who attempts to reclaim his possessions. Dice and cards are placed in a separate area for the ghost player. 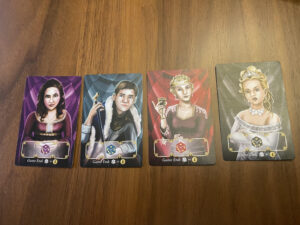 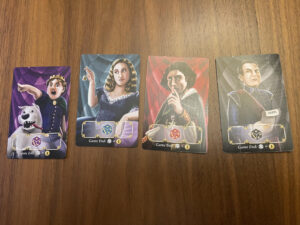 At the beginning of the game, the player takes the leader and lights out card, which allows them to go first, but only able to place one servant on their turn. On each turn, 3 cards are drawn from the deck, two face up and one face down. The cards are arranged in numerical order, with the face down card counted as 2.5 points. The player may place a servant die on any die face to attempt to claim a treasure on their turn. On the ghost player’s turn, the ghost rolls all dice, and places the highest die on the highest value card if one of the rolled dice are higher than your placed servant die. Then the rest of the dice are placed on the other cards if they are unclaimed, or are able to outbid the player. Once all dice are placed, lower value “outbid” dice are returned to the players, and each player claims the loot. 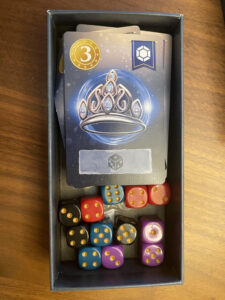 Inside the (tiny) box

The player rolls all dice that claimed cards. If the die rolls meet or are higher than the claiming value, they are returned to the player. If they are not, the servant is considered “exhausted” and retires to the box lid. On subsequent turns, the player may optionally forgo their turn to recover all exhausted servants. 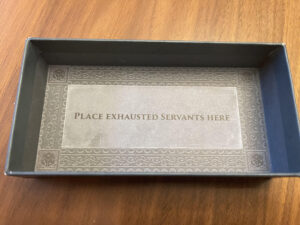 After the round ends, the Leader and Lights out cards pass to the ghost and rounds repeat until the treasure deck runs out. Every other round, the ghost goes first, but can only place one servant die. Face down cards have value beyond victory points, as the player has access to several “Collector” cards who give the player additional (word missing) when they flip face-down cards. 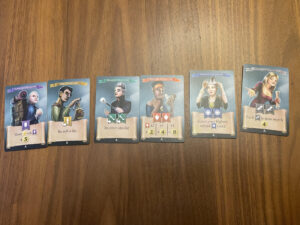 The Collectors also give additional rewards depending on the amount of types of treasures the players collect. The treasure types are Idols, Jewelry, Manuscripts, Pottery, Remains , and Tapestries.

After the final round points are tallied, and whoever has the most points, wins! Unexhausted servants grant one additional victory point each. 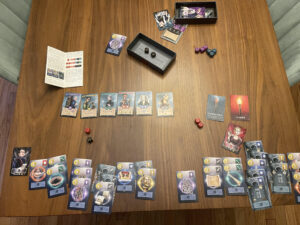 The game claims a fair amount of table space, despite its small box size.

Crypt is a budget game that I found on Kickstarter.com about a year ago. It’s unfortunately not currently in production anymore, but I paid about $15 with shipping for it at the time. The dice are of the rounded edge variety, and tend to roll around on flat surfaces, but the faces are easy to read in low light. They are color-coded, so some players may have trouble telling the difference between them. The cards are not the best quality: one of my treasure cards appears to have been slightly warped by water or bent accidentally at some point. The art for the characters is fine, but I enjoyed the treasure art, instruction booklet and the box itself more. I’m a bit of a sucker for games that utilize the box itself for game mechanics. For the price, the game is worth the money, particularly at higher player counts. 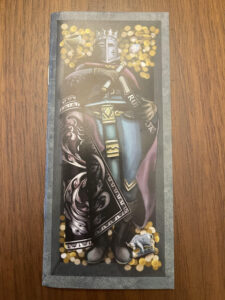 All hail the mighty mighty instruction booklet. Rest in peace, my king.

I finished the game with 43 points, which according to the instruction booklet means: “The Affluent” – You make a small fortune selling your family heirlooms.

The game is a pleasant enough experience at the solo level. I felt a bit outgunned by the ghost player’s never exhausting dice at times, but managed to acquire enough to make it to one level below the highest esteemed “The Magnificent”. I have played this game a few times with 4 players, and I actually own 2 copies, with included rules to raise the player count to 8. The game is more fun with additional players, as the bidding for items and player interaction is more cutthroat. Players may outbid die face 6’s with two 4’s, 2 5’s or 2 6’s.