“The Last Spell” is an early-access isometric grid-based rogue-lite strategy game . It is being developed by Ishtar Games. 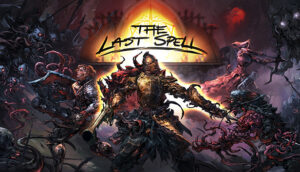 Initially, the concept of this game was what intrigued me. I’m a huge fan of isometric strategy games, including Final Fantasy Tactics, Advance Wars, XCOM, and the like. While I wait for Project Triangle Strategy, this game is scratching the itch that the lack of good tactics games in recent years has left.

The plot of the game is that magic has corrupted the world, unleashing a massive horde of zombies and demons. A group of wizards in a small village have found a way to cast one last spell, which will remove all magic from the world permanently. During the course of the game’s day cycles, you will have the opportunity to level up your characters (a wizard, an archer, and a warrior), purchase new gear, and upgrade defenses for your village. During the night, the monster hordes arrive, and must dispatched before proceeding to the next day. At the end of each night, the player is given a score based on how well the village was defended, and rewarded with gold and materials for defense upgrades. The monsters also award “tainted essence” on death. This can be used to purchase in-game upgrades that persist through new playthroughs. An in-game achievement systems also grants additional unlocks and rewards as well. 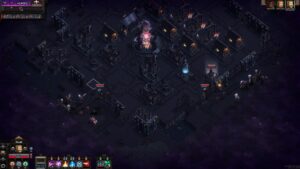 Each night the difficulty increases, forcing the player to ensure the best of base defenses, character builds, and gear upgrades. My first few runs were absolute disasters, but as with most rogue-lites, I slowly unlocked the “easy mode” by purchasing more and more upgrades. This trivialized the challenge of the first few nights, and allowed me to focus on experimenting with base defenses and new character builds. 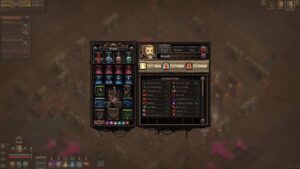 Despite all this, it took me dozens of hours to complete the final night. I saw the following screen countless times: 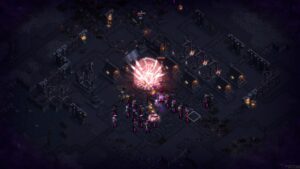 but I persisted, mainly due to the fun of the gameplay loop itself. I really enjoy the interesting choices the game presents, and how the game chooses to punish poorly defended bases or unbalanced character builds. Each weapon has its own set of moves, and weapons are assigned randomly at the beginning of each playthrough. More than once, I had off-meta (in my mind) gear that gave me a challenge trying to work with it. The first night is fairly forgiving, so purchasing an early weapon on the first day is always an option. 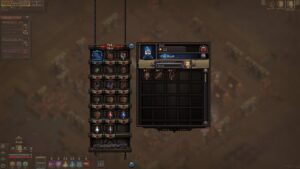 The pixelated art style is nice enough, being a callback to ’90s era isometric RPGs. The soundtrack is exceptional. They could have phoned this in with some chiptunes, but they went all out with heavy metal riffs during the nights, and a peaceful tune during the days.

Based on my time playing this game, I highly recommend it, particularly for fans of strategy games. I typically prefer to wait for early access games to get a full release before purchasing, but I think there’s enough content in this game to merit a $19.99 purchase on Steam.

This review is for the 0.92.2.3 version of the game. I played over 70 hours before writing this review. You can purchase “The Last Spell on Steam by clicking here. No compensation from the developer or publisher was received for this review.