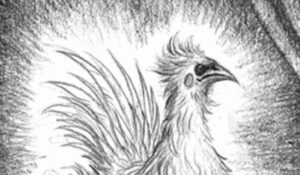 Patrons of the Grim & Perilous Patreon just received access to the Sixth Beast entry in our “Monster of the Month” series. In this one, we introduce the Caladrius.

“Known to roost itself in the presence of a clear pool of water, the Caladrius is synonymous with the cleansing powers found in the pool it lives in. When the waters of a pure spring push out of the ground, a Caladrius egg is formed in the minerals that are pushed to the surface. If left undisturbed in the cleansing waters…”